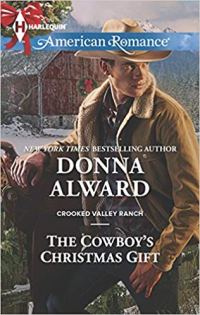 Several years ago I read (and loved) The Cowboy’s Homecoming, third book in the Crooked Valley Ranch series. In my review, I praised both the story and the series. Now I’ve finally read the first two: The Cowboy’s Christmas Gift, and The Cowboy’s Valentine.

The Cowboy’s Christmas Gift has a slightly misleading title. Duke isn’t a cowboy, he’s a soldier. He’s wounded, discharged, and has conditionally inherited 1/3 of a ranch from his grandfather. He hasn’t been there since he was a child, and the foreman, Carrie, was a fellow elementary school classmate. There’s instant attraction, but Alward maintains sexual tension for a while, which I appreciated, and the eventual bedroom scene (actually, rug in front of a wood stove, sigh) is described discreetly.

A relationship between employer and employee is awkward, which the characters acknowledge, and as it develops they try and keep it secret. Carrie’s financial situation is not great, thanks to family medical expenses. (As a Canadian, I find it sad how often medical expenses come up as a problem in American romances.) Duke is not sure if he’ll stay on at the ranch, which gives us the book’s narrative arc, and Carrie’s job (and the jobs of others) is in jeopardy unless he and his siblings decide to keep the ranch, which gives us the series arc.

The plot escalates with a romance trope I’m not fond of, but at least Alward handles it slightly more realistically than many writers. This book also introduces the characters who will have lead roles in the later books, and contains the meet for Quinn and Lacey. Which brings me to The Cowboy’s Valentine. I loved this book, and it’s my favourite of the three in this series. 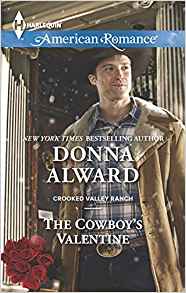 Quinn is the ranch manager, which is somehow different from being the foreman. As a city-slicker, I find all this business side of ranching stuff exotic. Quinn’s a widower, with a daughter around five. Quinn and Lacey met when Lacy came for a family Thanksgiving dinner at the ranch, and they argued over how to mash the potatoes. She wanted to use a ricer instead of a masher. I immediately liked her. (Although a little online research led me to discover that what I call a ricer is actually a food mill.)

Lacey returns to the ranch in January. Her life is not going as planned. She’s divorced, in debt (medical expenses again), and just lost her accounting job. Her 1/3 ownership of the ranch gives her somewhere to stay, at least temporarily, and means she’s frequently sharing space with Quinn, who has an office in the main house. She’s also seeing Quinn’s daughter frequently.

Quinn and Lacey are both wounded people. Quinn lost his beloved wife, and he’s struggling to care for his daughter who lost her mother. Lacey’s having a crisis of confidence, between the collapse of her marriage and the loss of her job. Refreshingly, the end of her marriage was not completely the ex’s fault. The early bickering between Quinn and Lacey is a way to communicate when neither can admit attraction, and even when they admit it, sort of, with a fabulous first kiss about halfway through the story, they are reluctant to enter into a relationship.

Amber is at that all too brief stage when children are impossibly cute. She’s obviously a catalyst for bringing Quinn and Lacey together, and a source of humour. When Quinn is injured in an accident, Amber’s reaction, and Quinn and Lacey’s reactions to that, had me sobbing (as discreetly as possible) in the mall food court. I’m sure I wasn’t this sentimental when I was younger, but that’s not a bad thing. There’s a happy ending of course, and the best possible outcome: nobody gives anything up, and the characters learn to live with their wounds.

Although these stories can be read as stand alones (since I did that with The Cowboy’s Homecoming), the amount of overlap means they work better when all are read, and in order. I enjoyed the Cowboy’s Homecoming more the second time through, as knew the context and secondary characters. Perhaps I need to start becoming a more organized reader.