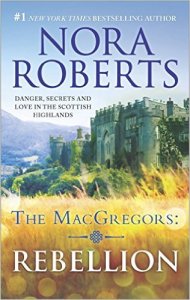 I’ve never read Roberts before, though I know the name. I didn’t associate her with Romance novels, but instead with the sort of works published by Harold Robbins and Jacqueline Susan. That may sound a bit snobby, particularly coming from a fan of category romance, not known for its great literature, but I prefer works that are a little less sweeping, dramatic, and long. The MacGregors: Rebellion is over 300 pages of sweeping drama, with a curious conclusion (which I give away, so stop here if you don’t like spoilers).

The story opens in 1735, in Scotland, where young Serena witnesses the rape of her mother by a British officer, and we’re off to a bad start. I know bad things happen, and this is to give Serena more than the usual reasons to dislike British men, but presenting this as prologue rather than a flashback makes it more immediate than it needs to be, and it sets an unpleasant tone for the story. Perhaps that tone is justified. The plot revolves around the Jacobite rising of 1745, which led to much bloodshed. Roberts has done a lot work to incorporate real events into her story, including the flight of Charles to the Isle of Skye, but it’s a grim setting for romance.

After the prologue, the story jumps to 1745, and Serena’s brother returns home with an English friend, Brigham. He is attracted to Serena, and she wants nothing to do with him. Serena’s a strong woman, which is good, but Brigham does not take no for an answer. Literally. So begins a tiresome courtship, where she is repeatedly overwhelmed by him, and he constantly pushes past her boundaries. This is an older story, from 1988, and perhaps that explains the unenlightened approach.

Apart from being unable to control himself around Serena (sigh), Brigham is a decent sort – intelligent, kind to her siblings, and so on. As proof of his goodness, he tracks down and kills the man who raped Serena’s mother. And I am supposed to be happy about this? Frontier justice, and winning a woman by killing another man?

Serena and Brigham have their wedding relatively early, and the rest of the story is the gruesome outcome of the Battle of Culloden. Serena and Brigham flee to America, which solves the problem of her not wanting to become a courtly lady, but means the American Revolution clouds their later years. Perhaps a lesson of the story is that romance happens anywhere and everywhere, but the story’s emphasis on the unpleasant realities of war distracts from the romance, such as it is.

In happier news, I won a free tote bag from Mills and Boon, for retweeting one of their announcements! It’s just a tote bag, but it’s always fun to win something. And, half-way through the year, I’m still on track for working an hour every week on Romance 1. I did miss a week, a few weeks ago, but made it up yesterday. An hour a week is a long way from the eight hours a day that Nora Roberts apparently puts in, but for some reason a lesson I learned from archery training comes to mind: Don’t worry about where you hit the target, just work on consistency.