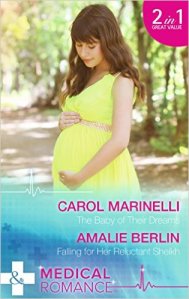 The Baby of Their Dreams, by Carol Marinelli, is a 2015 Harlequin romance in the Medical line. Unlike the old doctor-nurse formula (A Match for Sister Maggy, A Girl Named Rose), this is doctor-doctor – equality, right down to the specialty.

Cat and Dominic are both emergency room physicians. They meet at a medical conference, where Cat is a presenter. She’s recently ended a relationship, and tempted into a one night stand, thanks in part to the  freedom of being out-of-town and away from routine. Dominic is too arrogant for her taste, but he’s handsome enough for one night. That night stretches into the next day, and she starts to think it could be something more. Then she notices the ring and woman’s picture in his wallet. She returns home, with only her memories  – and a baby on the way.

Several months later, Dominic shows up at her hospital, applying to fill her maternity leave. She’s only made a half-hearted attempt to find him, and he’s angry. He wants to be an involved parent. He’s a widow, something he did not want to bring up right away, and did not get a chance to explain. Their relationship started with great sex, then moved to mutual distrust, but the obstacles to a happy ever after are not that great. Both have wounds, which, as appropriate to the genre, involve medical issues, and how the other reacts is part of what confirms their suitability for each other. A few medical emergencies keep the plot zipping along and heighten tension.

There’s never much doubt that this couple will get together, but it’s heartwarming to see them work through their internal and external challenges together. The story is well written, with details such as the significance of Facebook relationship statuses. A burned out light bulb is both a poignant sign of loneliness and a source of humour.

The only sour note comes in the epilogue, where both Cat and her friend, another doctor, seem to give up their careers and homes to support their husbands’ dreams. It is a sign of love to support your partner, but after a story where the heroine was strong and independent, the double devotion to husbands is a little too reminiscent of the  doctor-nurse romances of decades earlier.