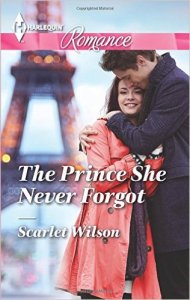 The Prince She Never Forgot, by Scarlet Wilson, was originally published in 2015 by Mills and Boon in their Cherish line. It quickly came across to North America as a Harlequin in the equivalent Romance line (“uplifting escapes featuring real, relatable women and strong, deeply desirable men”).

Alex and Ruby have a wonderfully romantic meet. Separated from their companions, they end up together watching New Year’s Eve fireworks in Paris. “This was the kind of thing she could tell her grandkids about when she was an old woman. I once kissed a gorgeous Frenchman in Paris on New Year’s Eve.” He leaves suddenly, due to a family emergency, and promises to keep in touch, but does not. She soon learns he’s a prince of a small kingdom, and his father has taken ill. She assumes nothing could have come of their evening, but remembers it fondly.

Ten years pass. Alex marries, has a daughter, and loses his wife to cancer. Ruby moves on as well. She lives with Luke for a few years, and has recently broken up with Paul. She advances in her career as a speech therapist, becoming head of the department at a hospital, and publishing articles. She never contacts Alex, and he never contacts her, though she suspects the flowers she occasionally receives are from him. Then Alex shows up at her hospital, to hire her and bring her back to his kingdom. His daughter is not speaking, he can afford the best help, and she’s the best. She’s offended he thinks she can be bought, but his generosity to her hospital is an offer she cannot refuse. Thus brought together again, nature takes its course.

The story has a great mix of reality and escapism. Sure, Ruby becomes the princess, but she wasn’t just waiting around for her prince. Wilson trained as a nurse, works in public health, and writes medical romance, so there’s ample detail on Ruby’s career, and her treatment of the daughter. One of the relationship obstacles is Alex’s complex relationship with his late wife, and resolving that adds depth and texture to the story. On the other hand, Wilson has fun with the royalty angle. “I always said I wouldn’t write a fictional kingdom, but the temptation was just too much.”

The excuses for not keeping in touch are a little thin, and while I dislike an emphasis on sex scenes, the one encounter here faded to black too soon. A touch more heat would have been nice. However, strong characters with pasts and growth, a grounding in reality, and some playfulness add up to a great read.