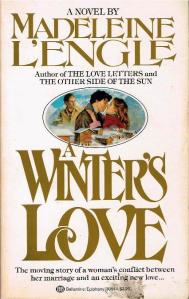 The title of A Winter’s Love

sounds like a romance, and the cover illustration shows an embracing couple with an unhappy less handsome man looking on, but the blurb makes sure I’m not deceived: “The moving story of a woman’s conflict between her marriage and an exciting new love…”  Hmm. Not a plot that interests me. People falling in love is fun to read; people struggling with whether or not to leave one person for another, not so much. The resolution of a love triangle almost always leaves at least one person unhappy.

I picked this up anyway, because one should make a point of trying new things, retrying old things, and the author is Madeleine L’Enlge – yes, that Madeleine L’Engle, of the wonderful fantasy A Wrinkle in Time and its sequels. No regrets, but I still don’t like explorations of love triangles.

The story was written in 1957, and is set more or less then. Emily, her husband, and their two daughters are spending the winter in a small resort village in the French Alps. Her husband, a university professor in Classical Studies, is attempting to write after losing his job in New York, and she, the dutiful wife, is trying to keep out of his way and keep the children quiet. Who should happen to visit the village but her old friend Abe, widowed, divorced, and looking for love.

Should she or shouldn’t she? Meanwhile, Emily’s teenage daughter Virginia is pursed by an anti-Semitic American boy, and Mimi, a friend of Virginia’s, staying with the family for Christmas, fancies Abe’s son Sam. A lecherous local doctor, a gossipy collaborationist,  and a jealous convalescent living with a ski instructor add opportunities for many reflections on the natures and forms of love, and desires and misunderstandings to drive the plot.

As for the husband and the lover, they are equally pitiable. Perhaps I am reading too many romances, where the heroes may have flaws but are, on the whole, heroic. Perhaps I am just turned off by men that ignore women’s feelings when they make love, in both the polite and vulgar meanings of that term. That one of the men would be left alone did not bother me in the slightest. I would have been even happier if she’d left both of them. If the story were ten years later, she might have. I suspect I am projecting modern sensibilities on a time too far to judge by modern standards, but too close to see as truly different.

The story is competently told, but I’m happy Ms. L’Engle moved on to more imaginative works. For a good old-fashioned adultery story, it’s hard to beat the real life letters in Contemplating Adultery: The Secret Life of a Victorian Woman. For a relatively modern fictional account of the bored housewife, my choice would be Judy Blume’s Wifey.

Some books surprise me by staying with me longer than I expected, and it’s usually the better written works that are more memorable, even if I find them less enjoyable. This review may be revised in the future. Until then, my bubble bath rating is whatever scent makes you happy (you’ll probably put in too little Gardenia, but that’s okay).